Cruising the Seine, plus Paris & London with Churchill’s Granddaughter on a Tauck Luxury River Cruise

Cruising the Seine, plus Paris & London with Churchill’s Granddaughter on a Tauck Luxury River Cruise

Fascinated by WW2 history? This luxury Tauck river cruise offers unparalleled insights and access to Sir Winston Churchill’s legacy in London - as well as the extraordinary delights of France’s cuisine, culture and art.

Journey from London to Paris by way of a River Seine cruise aboard ms Sapphire filled with Tauck exclusive experiences...

Private tasting tours, from wine to cheese to chocolate... discover treasured Parisian landmarks, steeped in history, culture and art... and return home with tales of adventures that become more exciting with each retelling. 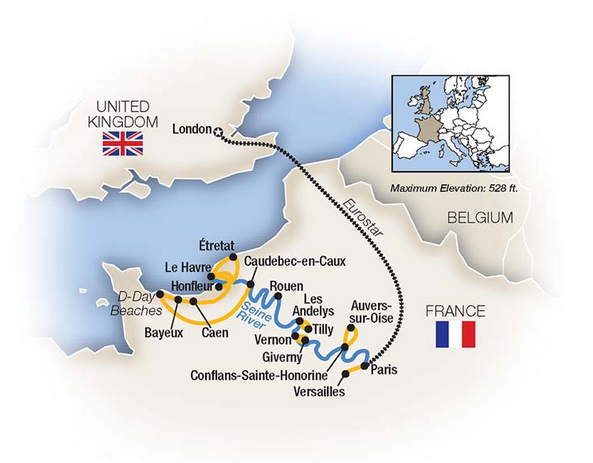 Wind through fishing ports and medieval towns, tasting Normandy cuisine, visiting the D-Day invasion beaches of Normandy, finding the deep essence of calvados, pausing in ancient abbeys and the picturesque haunts of Impressionist painters, dining at a chateau in Rouen, exploring cobblestone lanes, walking in Monet’s garden at Giverny, visiting Van Gogh’s muse in Aubers-sur-Oise, a visit to a private castle, and incomparable Paris... well, riverboating seems like the only way to go!

Private tasting tours, from wine to cheese to chocolate... a presentation by Sir Winston Churchill's granddaughter, Celia Sandys... stop in London, and you’ll have a tale of two cities you’ll want to tell over and over again...

ASK US ABOUT ITINERARY DETAILS, AVAILABLE DATES AND MORE 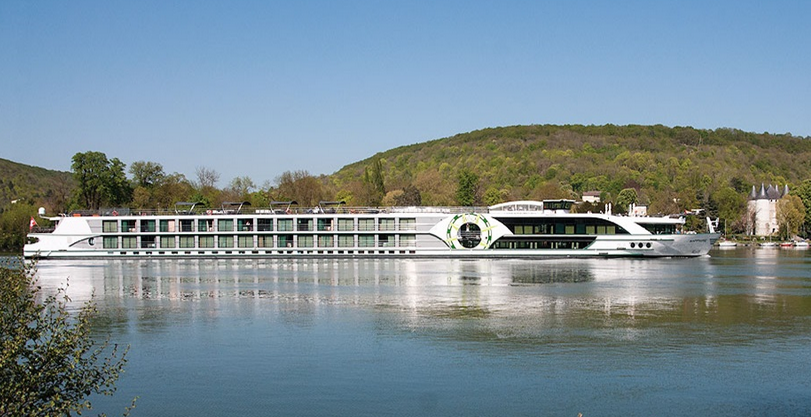 Redesigned in 2017 with a new deck plan optimized for the utmost in spaciousness, ms Sapphire is one of four 361-foot (110-meter) riverboats in Tauck's Destination Fleet that continues to maintain Tauck’s high standards for quality — with 70% of her cabins measuring 225 square feet or larger – and accommodating no more than 98 guests, while similar-sized riverboats average about 160.

One of the world’s most prestigious hotels, The Savoy is located on the banks of the Thames in the heart of the city. This legendary hotel has undergone the most ambitious restoration in British history, which has achieved a rare blend of unabashedly old-fashioned glamour and 21st-century amenities and style. When it’s time for a little refreshment, classic venues such as the American Bar, Simpson’s-in-the-Strand, the Thames Foyer with its afternoon tea and the Savoy Grill are beloved London institutions.

· All private Tauck shore excursions and distinctive inclusions – thousands of dollars in value!

· Two nights in London at The Savoy, one of the world’s most prestigious hotels

· Choice of museum visits in Paris

· Visit to artist Claude Monet’s house and gardens in Giverny

· Choice of visits to Étretat & Honfleur, or Caen & Bayeux

· Airport and train station transfers upon arrival and departure as noted

You will visit the following places:

Paris is the capital and largest city in France, situated on the river Seine in northern France, at the heart of the Île-de-France region. The city of Paris, within its administrative limits largely unchanged since 1860, has an estimated population of 2,193,031, but the Paris metropolitan area has a population of 11,836,970, and is one of the most populated metropolitan areas in Europe. In 2009 and 2010, the city has been ranked among the three most important and influential cities in the world, among the first three "European cities of the future" according to a research published by Financial Times and among the top ten cities in the world in which to live according to the British review Monocle.  The city is the home of the most visited art museum in the world; ''the Louvre'' as well as the ''Musée d'Orsay'' noted for its collection of French Impressionist art, and the ''Musée National d'Art Moderne'' a museum of modern and contemporary art. The notable architectural landmarks of Paris include Notre Dame Cathedral (12th century); the Sainte-Chapelle (13th century); the Eiffel Tower (1889); and the Basilica of Sacré-Cœur on Montmartre (1914). In 2014 Paris received 22.4 million visitors, making it one of the world's top tourist destinations. It is also known for its fashion, particularly the twice-yearly Paris Fashion Week, and for its haute cuisine, and three-star restaurants. Most of France's major universities and grandes écoles are located in Paris, as are France's major newspapers, including Le Monde, Le Figaro, and Libération.

5 Top Spring Flower Spectacles and Where to Find Them

If you're like me, Spring can never come too soon. And nothing says Spring like new flower blossoms. This year, ... learn more

Have you taken a river cruise in Europe yet? The 'Big Three' river cruises are the Rhine, the Danube and the Rho... learn more

A night time market in the grounds of a castle. Fires and torches and twinkling lights, the smell of evergreen boughs... learn more